In this series of short blogs we will delve into the treasures of Eastern Europe related to religious studies, being part of the collections of our partners. The first such treasure we'll take a look at is the stained-glass mosaic found in Aula Magna, University of Sofia. It was painted by Prof. Ivan Penkov, Bulgaria and Fr. Mayer, Germany (1931-1933).

On the 24th of May Bulgaria celebrates the holy brothers Cyril and Methodius. The holy brothers are celebrated as the creators of the Slavonic script and literature. The Old Bulgarian language the two brothers created started as a confessional language. It’s main purpose was to convey and explain the Divine Word to Slavs newly converted to Christianity.

The Old Bulgarian script and language spread out from Bulgaria t to other Slavic nations in the region. Until premodern times it served as a liturgical and bookish language for all Orthodox Slavs in South and Eastern Europe.

Without the linguistic genius of Cyril, the tenacity of his brother Methodius, the sufferings of their known and unknown disciples and followers, without the Bulgarian state in the late 9th century, that gave them a shelter, today Europe would have been different.

The Spread of an Alphabet

The Old Bulgarian script and language spread out from Bulgaria to other Slavic nations in the wide area and up to the premodern times. It served as a liturgical and bookish language for all Orthodox Slavs in Southern and Eastern Europe. The Medieval Bulgaria functioned as a cultural centre for the other Orthodox nations, including Wallachians and Moldavians.

The language created by the Holy brothers Cyril and Methodius shaped a unique religious and literary space dubbed “Slavia Orthodoxa” by Riccardo Picchio. Now Cyrillic is the third alphabet in the European Union after Latin and Greek. More than 250 million people in more than 20 countries make use of it. Bulgarian, Russian, Ukrainian and Serbian diasporas all over the world still make use of the alphabet.

A stained glass mosaic found in Aula Magna at the University of Sofia displays the Holy Brothers, Cyril and Methodius, alongside the cyrillic alphabet. Bulgarian painter Prof. Ivan Penkov, who created the stained-glass mosaic, also created stained glass pieces for other noteworthy Bulgarian sites. His mosaics can be seen in the halls of The Bulgarian National Bank, The Bulgarian Ministry of Justice and in the University of Sofia.

If you want to explore the treasures of Bulgaria, you can read more about the works of Prof. Ivan Penkov here (the text is in Bulgarian). 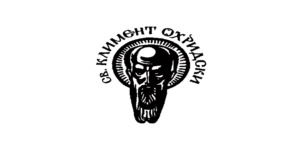