The mosque in Kruszyniany is one of the lesser known but important monuments in Poland. It is a key place for the Tatars, an ethnic minority, living mainly in Podlasie (north-eastern part of Poland).

The village of Kruszyniany is located close to the border with Belarus. It was one of many villages founded by the Tatars in this area in the second half of the 17th century. At that time they served the Polish–Lithuanian Commonwealth and fought on the Polish side in the Vienna campaign. As a reward for their return to the Commonwealth, King John III Sobieski gave them, among others, land in the Podlasie region. Kruszyniany and Bohoniki are the last of the villages which remain the home of Polish Tatars to this day. Kruszyniany is also the cradle of Tatar culture in Poland, with a community of fewer than 2000 people. 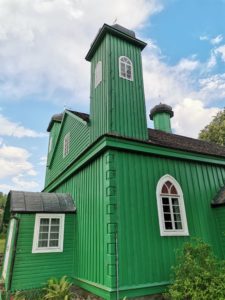 The characteristic, wooden mosque in Kruszyniany is over 300 years old and is the oldest Lipka Tatar (Polish–Lithuanian Tatars) mosque in Poland. According to the Muslim tradition, the interior is divided into two parts. In the men’s part, there is a mihrab (a niche indicating the direction of Mecca) and a minibar (a pulpit where the imam stands to deliver sermons). The second part, separated by small windows covered with curtains, is intended for women. The interior of the temple is decorated with inscriptions from the Quran and images of mosques. According to religion, images of people are prohibited. Just behind the temple, there is also an old Tatar cemetery – mizar. The building is open to the public all year round.

The mosque in Kruszyniany is one of the symbols of multiculturalism in Podlasie and a vivid symbol of religious tolerance over religious and ethnic differences. When in 2014 the mosque was attacked by vandals who painted xenophobic drawings on the building, the residents made efforts to restore the mosque together.

Any cookies that may not be particularly necessary for the website to function and is used specifically to collect user personal data via analytics, ads, other embedded contents are termed as non-necessary cookies. It is mandatory to procure user consent prior to running these cookies on your website.