Treasures from Eastern Europe: The Life of the Lord Jesus Christ

The treatise entitled "Żywot Pana Jezu Krysta" [The Life of the Lord Jesus Christ] by Baltazar Opec, published in 1522, is the oldest entirely preserved printed book in early modern Polish. Opec was a preacher working in the Kraków, the capital of the country at that time.

The vernacular text prepared by Opec is a loose translation of the Latin meditative and apocryphical work of medieval origin, that is Meditationes vitae Christi by a Franciscan friar Johannes de Caulibus (active in 14th century). Opec compiled it with other sources using ancient apocrypha (i.e. corpus of texts introducing details on the life of Christ and his family that never became part of the official Biblical canon, but were capable of satisfying the curiosity of Christians, trying to reconstruct imaginatively the entire Christ’s biography).

The outstanding value of this early printed book is also determined by its physical, not textual features. It was impressed in Kraków in the workshop of Hieronim Wietor (ca. 1480–1547), one of the most skillful typographers active in Poland in the first half of 16th century who was responsible for publishing many of the earliest printed texts in Polish. The resources of types and woodblock matrices owned by Wietor and used in his production were of highest quality, revolutionizing the local book market. 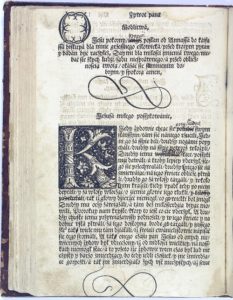 The 1522 edition of the treatise by Opec is decorated with a cycle of scenes presenting the Christ’s life. 39 full-page woodcuts are the compositions after Hans Schäufelein (ca. 1480–1550), an artist from the circle of Albrecht Dürer. Wietor had the illustrations copied by another craftsman after the Nuremberg edition of Speculum Passionis Domini nostri Iesu Christi (1507). Furthermore, the entire Polish book was printed using types imported from Germany, called the fracture. The set used by Wietor had characteristic sharp edges, finished with decorative flourishes emerging from the letters. The reader’s attention can be also drawn by Renaissance initials with a motif of acanthus leaves, characteristically printed as „negatives”: a white line on black background.

The book owned by and stored in the Warsaw University Library, included into the collection already in the 19th century, is preserved in the best condition compared to all the other known copies of the 1522 edition. Examples of the early modern printed books, either vernacular or Latin, serve as a fruitful resource to historians of art, literature, printing and technology, religious practices and customs, transfer of ideas, and many others. Artefacts – such as the copy of Opec’s treatise – enable them to meet.